Online safety is an important part of keeping children safe at Oakworth Primary School. We have extensive security measures in place in school, which are monitored both internally and externally, to help safeguard pupils from potential dangers or unsuitable material. It is essential that parents support their children in navigating the online world. At Oakworth Primary School, we really appreciate your ongoing support with this. If you have any questions, concerns or suggestions please get in touch with Mrs Owen, Computing Leader or Mrs Mayo, Head teacher.

#SID18 Factsheet for Parents and Carers

Online Safety for Children and Teens: A Comprehensive Guide to Staying Safe Online

This website is run by the Police agency Child Exploitation and Online Protection (CEOP) Center: http://www.childnet.com

Childnet International is a site provides a great resource for parents called ‘Know IT All’: http://www.ceop.police.uk/safety-centre/

MOMO: What Parents need to know If your child or pupils use SnapChat there has been an important development this week with the release of a new feature to use in the app. The new feature is called Snap Map which allows users to broadcast their exact location and what they are doing in real time. It is important that children and parents are aware of the dangers of this new feature and how to continue to use the app safely.

Snap Maps is accessed by going to the SnapChat camera and pinching the screen outwards with two fingers. This reveals a larger world map with animated pictures to represent where friends are and what activity they are doing in real time. Obviously this presents dangers and fears about tracking or stalking especially with children that use the app.

Fortunately there is a mode within the feature called 'ghost mode' which allows users to hide their location and only the user themselves would be able to see their location. To access this option, follow these steps;

Should you put a picture in to a 'Snap Story' then this picture may still be viewed by anyone and could still reveal your location even if you have activated ghost mode.

If you would like any more information on how to use SnapChat or any other social media app then the NSPCC Net Aware website is a great place for advice and information.

Alan Earl, Harm Reduction Officer, from UK Safer Internet Centre partners, the South West Grid for Learning, explains a bit more about the app, the risks and what parents can do to avoid them.

What is Pokemon Go?

Pokemon Go is an app enabling users to create a character (any name) and partake in a mobile version of the Pokemon game made popular through Nintendo.

Once created the app uses Geo Location enabled through the phone to identify the users location. A map is then provided which shows nearby Pokemon. The basic premise of the game is to walk or ride towards the Pokemon in order to capture it and increase your game status. Capture is achieved by throwing a virtual ball on screen at the character, some of which are harder to catch than others. Distance away from the character is shown in footsteps (1,2 or 3) this was changed from the Beta version which originally showed true distance. Footsteps will decrease as you walk towards the character, once in the right area the character pops up and an attempt can be made to catch it.

Characters are widespread and there do not appear to be rules as to where they can be found although popular spots do appear to have more.

Many of the original features of the Pokemon games are embedded and this will include Gym’s. This is where players congregate to use their Pokemons to fight Gym leader Pokemons in the Gym in order to improve fighting skills and status. In the new Go version players will come across Gym’s during their travels. If they have the necessary skill level and experience they can enter this virtual gym and take part in fights. There are popular Gym’s where (set up as a virtual Gym) players will physically attend in order to fight. These can be anywhere but tend to be in public open well known spaces.

The risks and what you can do to avoid them

Although new and still developing in the UK the media as always is keen to point out the darker issues and incidents when describing news stories.

The game itself is hugely entertaining and immersive and provides the opportunity for parents to engage with their children outside the home with technology. Herein lies the option to encourage children out of their bedroom into the real world for some exercise whilst still being able to use gaming technology.

Some of the early issues identified are likely to be around environment awareness. It is very easy to become totally absorbed in capturing that elusive Pokemon but not being aware of the lamppost you are about to walk into or the ditch you have veered towards. Already there are badge of pride postings on social media of ‘Go’ players who have injured themselves in this and similar ways. Wise maybe to talk to your children about heads up regularly during play.

Stanger danger messages are still applicable and teaching children not to be frightened but wary of strangers can be difficult in this setting. The context of meeting someone at a Gym may give a child a feeling of safety within the Pokemon community that does not exist. Great to have a conversation around this and how care needs to be taken wherever you are. Especially in view of the fact that users can purchase Lure Modules  these enable users to attract more Pokemon characters to their set location (acts like incense to the characters) therefore encouraging more people to the venue. Keep those messages going.

Finally, people looking at screens in public areas like shopping centres is not something new and is a regular sight. Small groups of children running around quiet cul-de-sacs phone in hand shouting about Squirtles, Vulpix and Jigglypuffs may cause some consternation and concern from different quarters. Maybe we need to discuss this with our children and explain how being sensitive to their surrounding can help them avoid some problems.

As with all new technology there will be a period of re adjustment and understanding. Rather than allowing the media to show us horror stories about the new technology I think now is the time to look at it ourselves and then have open conversations with our children. As with everything a set of rules and honest conversation will avoid many of the issues and allow your children to enjoy what is an engaging and fun game whilst avoiding some of the pitfalls. In this case many of the rules you already teach are hugely applicable here. Taking care around strangers whether Pokemon players or not. Considering and being aware of the dangers of your physical locality and considering the concerns of others whilst engaged in playing the game will be a start on dealing with the fallout from Pokemon Go. As the game develops and more is known I am sure the makers and Online safety experts everywhere will be able to point to coping mechanisms if necessary.

Year 6 have been thinking about the impact of spending too much time online has on children. Their posters are great! 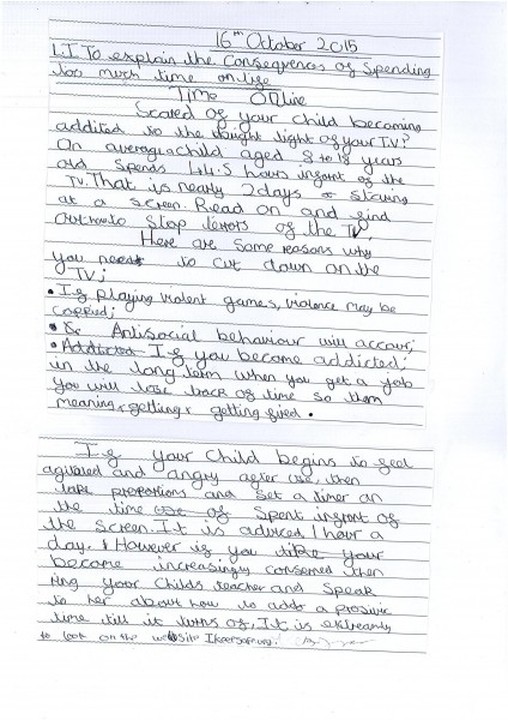 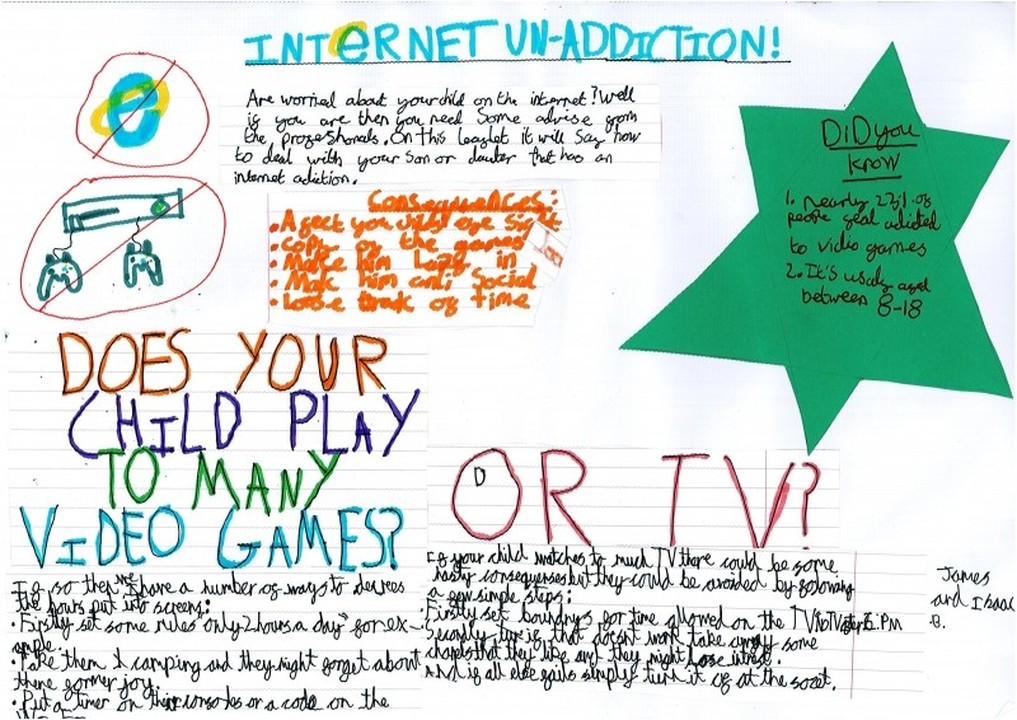 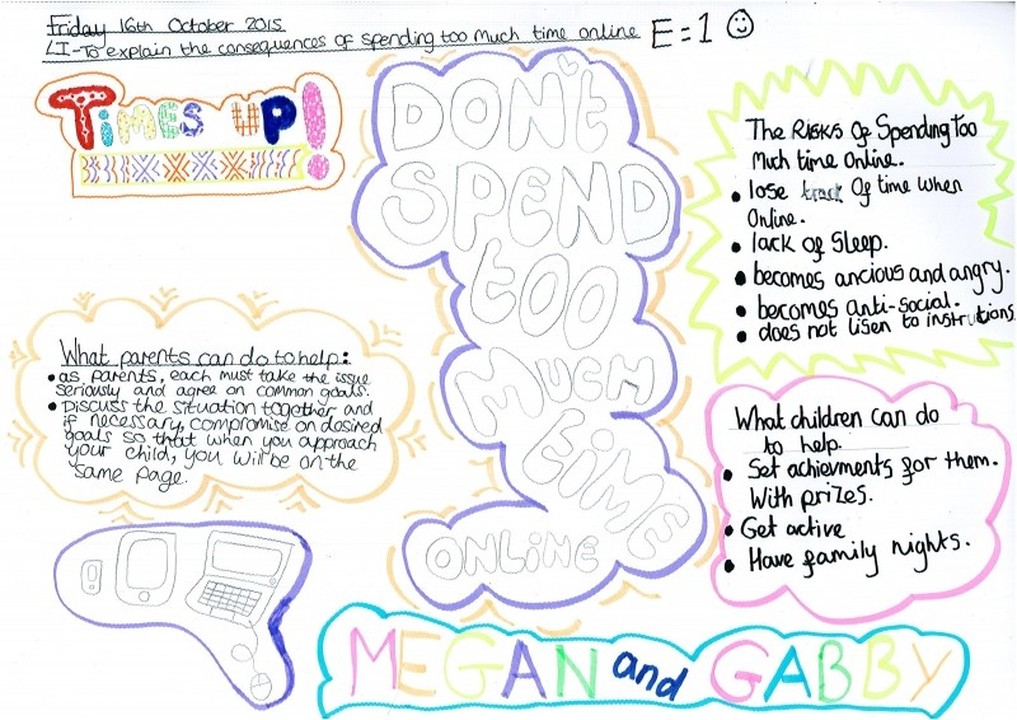 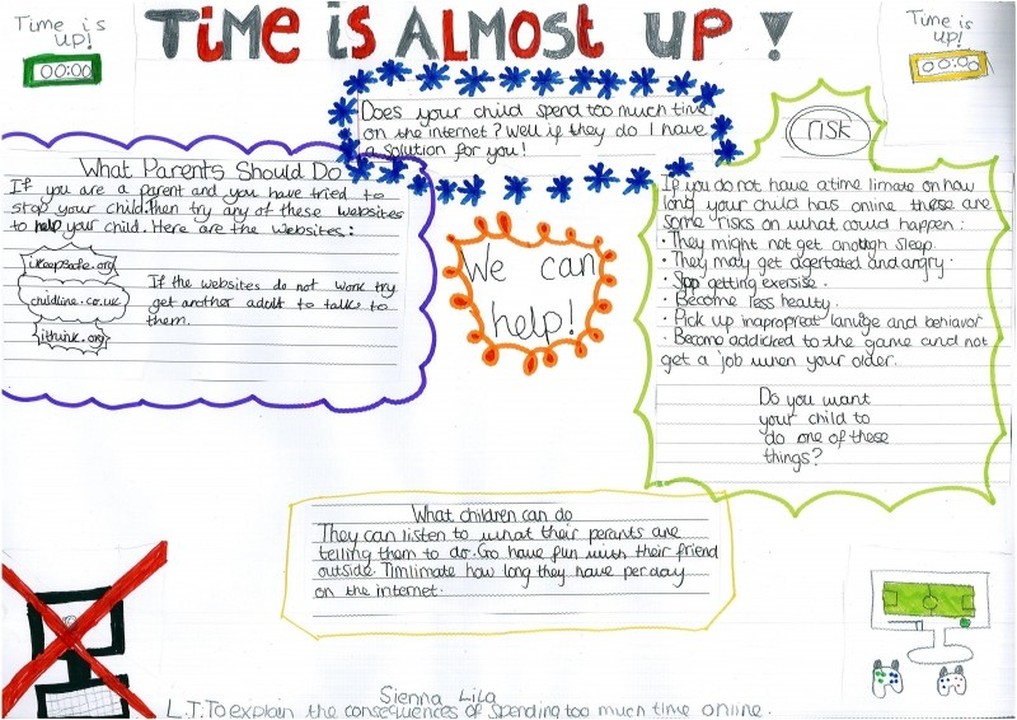 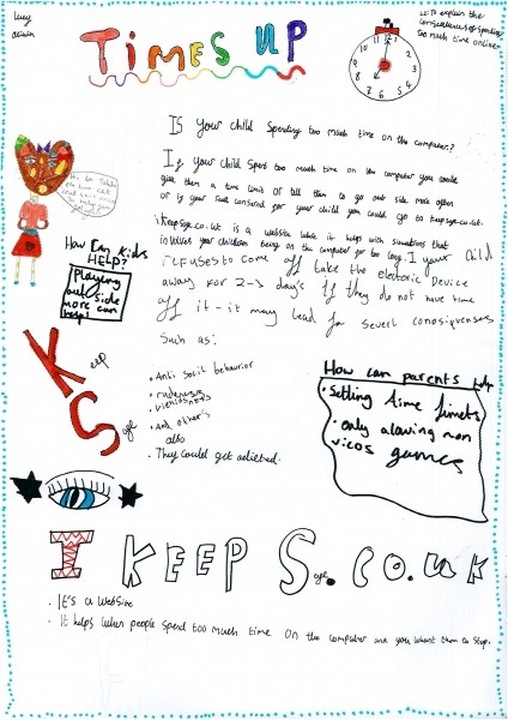 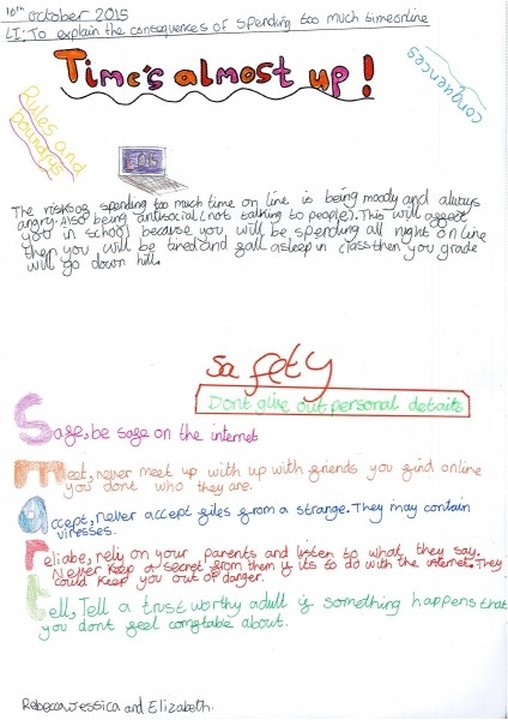